This year again, two students were able to benefit from a research scholarship from the Académie des Inscriptions et des Belles Lettres allowing them to spend a year at the École Biblique. These grants are given to students (master II, doctoral or post-doctoral students) devoting their research, for one, to oriental archaeology and for the other, to the study of biblical texts and oriental philology.

Find out more about the two students who received the prestigious scholarship this year, as well as their research topic: 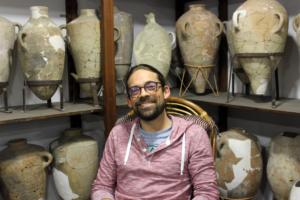 “A major document of intertestamental literature discovered at Qumran, the Temple Scroll manuscript (11Q19) gives a detailed description of an oversized sacred complex and provides prescriptions for the cultic rituals as well as the political and territorial organisation of the people of Israel.

The project of cultic and religious reformation of this manuscript implies, on the one hand, a textual reworking of the literary descriptions of the Pentateuch, and on the other hand, the conception of an architecture adapted to new sacrificial and ritual practices. The problem then arises of the implementation of this ambitious project and of the insertion of architectural elements from what we know of the archaeological context of Israel. Considering only the architectural aspect, the Temple Scroll describes buildings whose dimensions are often exaggerated, casting doubt on their technical viability. Similarly, the extreme demands of purity expected are difficult to envisage in the long term and correspond to a religious ideal. Clearly, the space and society described here is more of an ideological, polemical and utopian discursive framework where architecture is an act of resistance. A work of innovation, the Temple Scroll is situated in an in-between: between reality and fiction.” 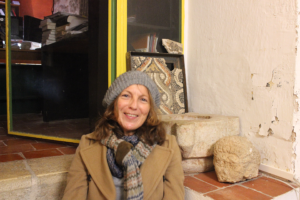 “Receiving the A.I.B.L. scholarship to study for an academic year at the École Biblique Jerusalem with Jean Baptiste Humbert was a great surprise and delight for me. It has enabled me to concentrate full time on my research which investigates the sanitary state and health status of the people buried at Qumran.

Following a lengthy desk stop study in Ireland through lock down where previous studies could be linked up and data merged, and basic health profiles built , the trip to Jerusalem has allowed for access to published studies on the subject, visits to the site, and lectures on topography, geography and survey in relation to Qumran. All important to encompase an overall picture.

The scholarship has also allowed for a physical examination of the remains from not only a physical anthropological investigation, but also from the point of view of medical forensics which allows to build a health profile for each individual whereby a differential diagnosis may be achieved. The bones after over 70 years are still revealing surprises in the ever evolving research of Qumran!”