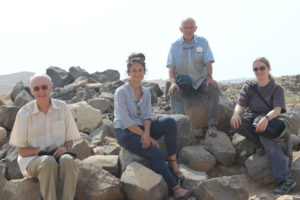 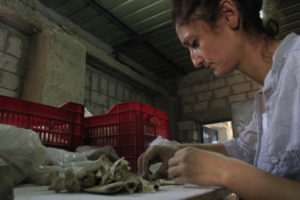 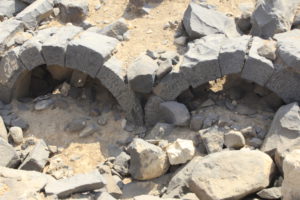 Remains of arches buried in the sand 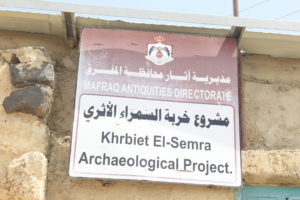 Welcome notice at the site 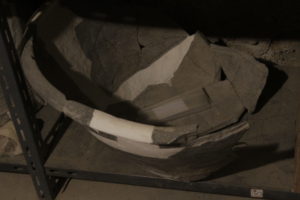 An example of pottery after conservation 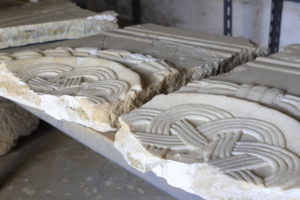 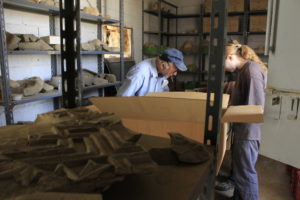 Material from the dig being sorted by Br. Jean-Baptiste Humbert O.P. and Manon Senko

Between July 2nd and September 1st, the archaeological team of the Ecole Biblique made a visit to Amman. From their improvised post in the rear, the brothers continue every summer to sort, sketch and classify the material that had been found on the Samra site, a dig they completed in 2009. A second and a third publication on the subject are in course of preparation. This is the story of a dig that has lasted for decades.

In 1924 the Dominicans Antonin Jaussen and Raphaël Savignac interrupted their usual exploration by caravan, and for the first time crossed the splendid deserts of Jordan by car on a journey they described as ‘epigraphic’. The story goes that in the north of the country, near the Syrian border, Savignac spotted inscriptions engraved on stones lying on the ground and stopped the car. The explorers rapidly identified first one and then a number of funerary steles inscribed in Palestinian Syriac (Christo-Palestinian). A Bedouin of the district told them “it’s in Arabic but I can’t read it”. Br. Savignac published an analysis of them in Revue Biblique for 1925. The “dig” came to a halt there for the period, at ground level…

Fifty-three years later, in 1977, Alain Desreumaux, who was bursar at the Académie des Inscriptions et Belles-Lettres and a student of the Ecole, discovered the 22 page article entitled An excursion in Transjordan at to Khirbet Es-Samara (known in Arabic as “the dark ruin.” As a result of this find he chose this as the subject of his thesis and visited the spot in 1978. He and Br. Jean-Baptiste Humbert O.P. presented their researches two years later at Oxford at a conference on Studies in the History and Archaeology of Jordan (SHAJ). This was in March 1980. Considering the quality of the presentation the Service for the Antiquities of Jordan gave the responsibility of excavating the site to the Ecole. During that summer of 1980 Br. Jean-Baptiste Humbert, who was responsible for archaeology at the Ecole, closed the excavations at Tell Kaisan in Galilee and prepared for his first dig in Jordan.

The dig began in July 1981. Nothing was known of Samra except for the cemetery discovered by Br. Savignac, and not far away the remains of a Roman fort. The first hours were promising. Before digging out the site, four soundings were carried out at the heart of the ruin, four squares measuring 2X2 metres at a distance from one another. These four revealed four mosaic pavements which turned out to be the floors of four churches! The project was launched, and the search would extend over 28 years, with delays and interruptions for work on other sites (Mafraq, Amman, Gaza etc) and several “home-based” campaigns involving no excavations.

In the course of the first eight campaigns which followed on from one another until 1988, a large Roman house, called the Mansio, was discovered at the entrance to the village of Samra, along with the remains of a Roman paved road, a large Roman pool, a fourth-century fortress, and eight Byzantine churches dating from the seventh century. The mosaics tell us that the oldest of them was laid in A.D. 610 and the most recent in 649. In this part of the world this was the time of the slow movement towards Islam before the place was deserted in the course of the 9th century. Whilst the team’s archaeologists, led by Alain Desreumeux and Br. Jean-Baptiste Humbert, had come to seek the traces of a Christo-Palestinian community, they quickly came to a more exact description, the Christianisation and the de-Christianisation of the region.

Between 1986 and 2002 Br. Humbert interrupted the dig to devote himself to other projects: the Umayyed palace of Mafraq, the citadel of Amman where he discoverered a neo-Assyrian palace in 1989, followed by the restoration of the copper roll of Qumran in 1993, entrusted to France, and finally the excavations in Gaza since 1995.

The dig in Samra resumed only in 2002 and ended in 2009, for four campaigns during which three new churches were discovered. “If we carried on digging, we’d continue to discover more of them,” the Dominican brother assures us today. In the course of the years eleven churches have thus been revealed, eight of which have two side aisles adjoining the nave and eight floors paved with mosaics, besides precious furniture: a small Roman altar, more than 300 fragments of low enclosures of wood or stone separating the nave from the choir, lustrous bituminous limestone, limestone capitals painted red and fragments of marble columns.

The digs have revealed the life of a Byzantine village, ordinary enough with its remains of vessels for the cooking, storing or transport of foodstuffs, oil, wine etc. At Samra more than 800,000 potsherds have been counted from which only 3,000 have been selected and 2,000 chosen for publication. The number of these thousands of bits of pottery explains the slow pace of studies over the years.