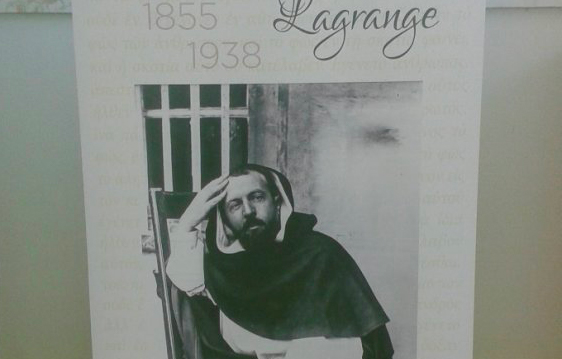 On Monday, the 27th of november 2017, the General Postulation of the Order of Preachers (fr. Gianni Festa, General Postulator; fr. Llewellyn Muscat, Secretary of the Postulation) invited the Dominican family, religious from other orders and the general public to the international round table organised at the Pontificia Università San Tommaso d’Aquino (PUST), on the occasion of the new edition of fr. Lagrange’s work The Gospel of Jesus Christ (1).

From 3.30 pm to 18.00 pm, the Aula minor of the University welcomed the organizers’ and four scholars’ interventions, which examined multiple aspects of the Servant of God’s life and work as a fine scholar and the founder, in 1890, of the École biblique de Jérusalem.

The contributors were greeted by two representants of the Order of Preachers in Rome -the Master of the Order, fr. Bruno Cadoré; the General Postulator, fr. Gianni Festa- and by the Rector of the PUST, fr. Michel Paluch op. The secretary of the Congregation for the Doctrine of the Faith, Mons. Giacomo Morandi, opened the session with an overview on “The figure of fr. Marie-Joseph Lagrange and his calling between biblical-theological studies and sanctity”. Mons. Morandi underlined fr. Lagrange’s qualities as “a scholar and as a profoundly ecclesial man, inside the Church’s connective tissue”, giving life to “a harmonious and accomplished synthesis of different parts”. The characteristic features of the believer, the authentically religious man, and the researcher were thus reunited in f. Lagrange “which belonged to Christ as a true son of Saint Dominic”, marked by an “overabundant heart” and an obedience which was “strong, lively”, unfailing.

Subsequently, prof. Maurice Gilbert sj (Pontificio Istituto Biblico, Rome) looked into “The exegete Lagrange’s evangelical virtues”. Prof. Gilbert emphasized, in particular, fr. Lagrange’s “double commitment”: for “the Church’s honour” and for “the greater good of souls”, never losing sight of the unity of Christians. Such a commitment was constantly renewed by love (for Truth; towards the Church, and the Pope; for the biblical texts, studied and meditated), in a spirit of obedience, and through prayer.

The director of the ÉBAF, F. Jean-Jacques Pérennès proposed a reflexion on “Fr. Marie-Joseph Lagrange’s legacy to the Ecole Biblique de Jérusalem today”. Lagrange’s love for Jerusalem left an everlasting mark on his life and work. In order to understand the sacred texts, fr. Lagrange applied himself to “understand the country and its complex history”. In this way, the Servant of God became acquainted with that country, so extensively explored that his profound knowledge of the land was unequalled. For fr. Lagrange, the “structuring process” of the École biblique was a mission to accomplish for the sake of the Church; even so, his approach complied with the most rigorous scientific criteria. In his search after Truth, fr. Lagrange adopted, then, “a theological perspective”, whilst gathering a team of specialists of the first rank; he privileged the dialogue between different domains and methods, so as to encourage the “progressive autonomy of knowledge”. The quality of fr. Lagrange’s works was so outstanding that they soon attracted the attention of students and scholars alike, even non-christian ones, from abroad. Fr. Lagrange’s work is still relevant and helps today’s students and scholars to reflect on the actual state of research concerning, in particular, the comprehension of the Sacred Scripture’s literality.

F. Augustin Laffay (Institut Historique Dominicain, Toulouse) closed the session with an intervention on “F. Marie-Joseph Lagrange: a spiritual itinerary”. As a historian, f. Laffay proposed an intimate history of the Servant of God, made of “founding figures”, encounter and places that forged his spiritual identity. In primis, since his youngest age, Marie-Joseph “was close to the Holy Virgin and many Saints”, and his fervour is properly fuelled in the bosom of his own family, whose faith is great. Jean-Marie Vianney, the curé of Ars, is another significant figure in fr. Lagrange’s intimate history, inviting him to undertake a pilgrimage, studded with prayers of thanksgiving, in situ. Later on, once in the seminary of Saint-Sulpice, the young Lagrange “discovered a passionate love for the Word of God”. Fr. Lagrange development was filled with several other figures (for ex., Saint Mary Madeleine, Saint Therese of Avila), and places (the Royal monastery of Saint-Maximin-la-Sainte-Baume), also decisive. Thanks to the influence of f. Cormier, another figure of crucial importance, the young Lagrange learnt the “Charity of God”, and to love Saint Dominic.

This last contribution announced the inauguration of a historical and documentary exhibit on the same subject, organized by the Institut Historique Dominicain in addition to the round table: “F. Marie-Joseph Lagrange. His spiritual itinerary through documents and photographs”, a precious and touching collection including, among other things, several handwritten documents, some relics and fr. Lagrange’s pocket watch. A series of panels with photos and texts in English on “Father Marie-Joseph Lagrange (1855-1938)” is also on display until Christmas at the Pontificia Università, in the corridor next to the Aula minor. Six panels corresponding to six significant stages of the Servant of God’s life: “Inheriting the Faith”, “Following Christ”, “Service of the Word”, “The Holy Land”, “The Biblical School”, “Monstra te esse Matrem ».

12 December, 2017 – Elisabetta Deriu, External collaborator of the General Postulation of the Order of Preachers. »