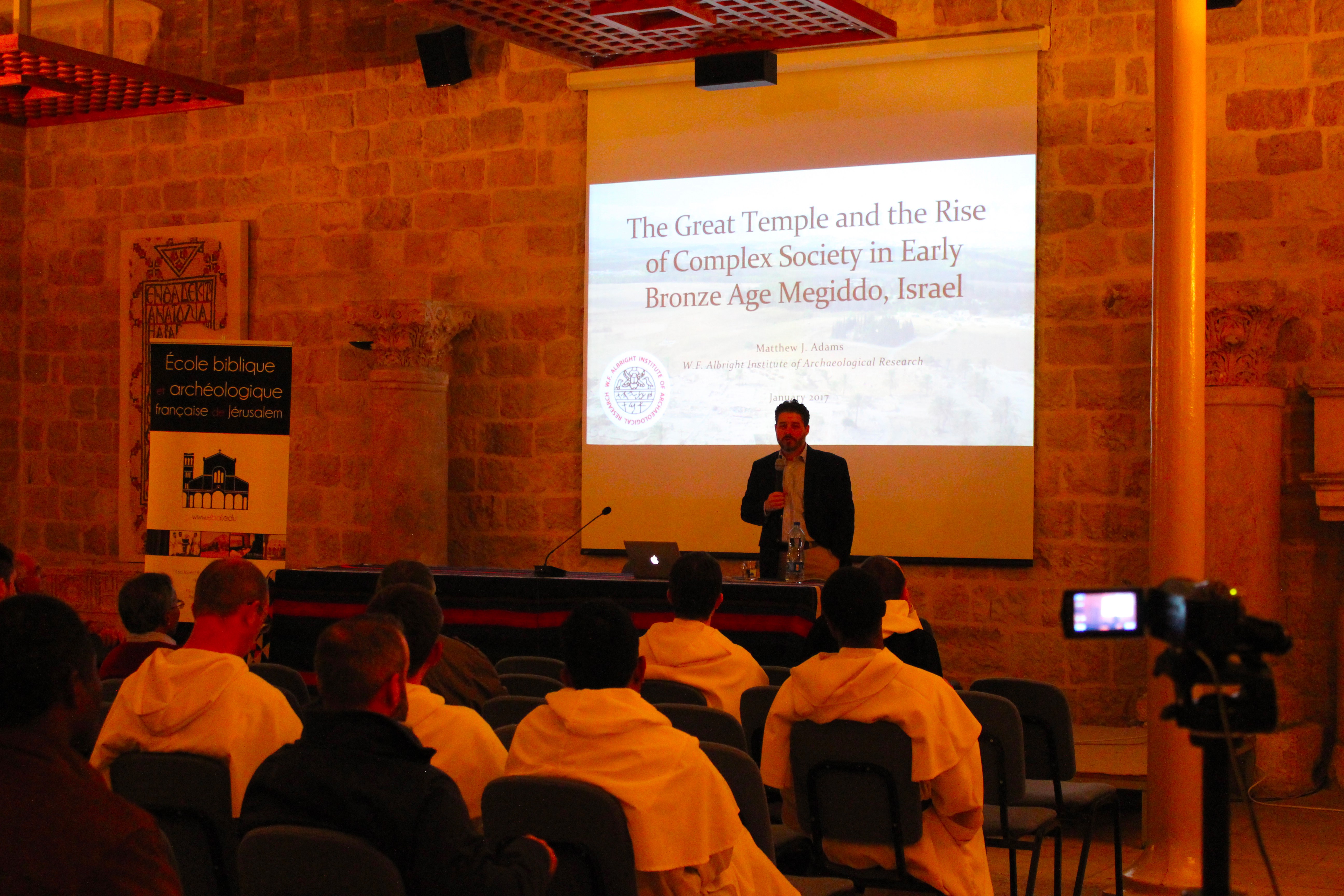 Matthew J. Adams, Director of the Albright Institute and neighbor of the École biblique, gave a lecture about Megiddo on Thursday 4 January 2018. The relationship between our two Institutes is very good. Interview:

“My name is Matthew Adams, I am the Director of the Albright Institute, in Jerusalem, now in my fourth year. I received my PhD from Pennsylvania State University, in Pennsylvania, in the US, in Ancient Nearly Eastern History and Archeology and Egyptology. I work primarily in Egypt, and Israel and Palestine. Currently I am conducting excavations to Megiddo, in cooperation with Israel Finkelstein  and Mario Martin. I also dig near Megiddo at a site called Legio, which is a 2nd-3rd century Roman legionary base, with my colleague Yotam Tepper. This week, I have also initiated another project, near Bethleem, at Solomon’s pools, main water collection and distribution system for Jerusalem for the last two thousand years. We are digitally mapping three large pools to prepare for an intensive conservation project. These projects define my professional life, but I also have a personal life, which is very much defined by my wife Margaret Cohen (a biblical scholar) and my two young children, Atticus and Cyrus.

Did you come here just after your studies in USA?
Yes, that’s right. I finished my PhD in 2007, after which I taught courses at Bucknell University for five years. I began my directorship here in 2014.

You are the director here. Who are the other people working with you?
We have a staff of twelve at the Albright, including our Communication’s Director, Sarah Fairman, who is very much my right hand. We also have Financial Manager, a Chef, librarians, as well as housekeeping and maintenance staff.

What are your activities?
As director, I am active in everything! So I am heavily involved and in the day to day management of the Institute, fundraising, and in providing resources for our fellows and our residents. And the Albright is, as it’s called, a research Institute, and so we have scholars coming from all around the world, not just the United-States, but from everywhere, to conduct their research here. We provide about three hundred thousand dollars in fellowships annually ; we provide room and board, several amenities, and space for them to conduct their research. And so one of my jobs is to facilitate the research, and make sure, they are happy, and if there are problems, to help them.

Do you have a Library?
Yes we have an extensive library focused on Near Eastern Studies, and especially the archaeology of the region. Our resources complement well the other nearby facilities provided by the Ecole biblique, Rockefeller Museum, and Hebrew University. What are the story of this place and its role today ?
The Albright was originally founded in 1900, so this is our 118th year. Not quite as old as the École biblique, unfortunately, but similar ! We purchased our current property in 1919 and our famous building was completed between 1924 and 1930. As one of the early research organizations operating in Palestine, we were very influential in the development of biblical archeology. In those early days, our fellows played as significant role in the identification and early exploration of many of the sites that we take for granted today. Archaeology as a discipline had not truly been invented yet, and so many of the people who came here in those days were pioneers who developed the concepts of archaeology in use today. For example, William Foxwell Albright, who was Director in 1920’s and 1930’s conducted some of the earliest excavations in the region that directly contributed to the development of archaeology. For example at Tell Beit Mirsim, he excavated a stratigraphic sequence of the Bronze and Iron Ages, and assembled for the first time the ceramic chronology that we use today. So, when we talk about the Early Bronze Age, or Iron Age, automatically those categories go back to Albright.

So in all these ways, the Albright has contributed to archaeology in the region, but I should say that while we call ourselves the Albright Institute of Archaeological research, archaeology is only one discipline represented by our fellows. We have biblical scholars, linguists, historians – anyone who works on anything from the medieval period and earlier has a home in the Albright. Today, we are the largest foreign private archeological and historical research facility in the region. At present, we have about twenty-five fellows who are here through this academic year, and they are working on a wide variety of topics. And today, what about the excavations, about Megiddo ?
I have been working at Megiddo since 1998, it was my first archeological project, when I was a young student. This year I celebrate my twentieth year of Megiddo – something impressive, it is crazy to think about it! – but now, for the last four years, I am one of the codirectors of the excavation, it is nice to start at the complete bottom, and go to the very top! And this year we are working on four excavation areas, of the Bronze and Iron Ages. In today’s lecture, I will be talking about our work on the Early Bronze Age.

Do you come often on the archeological sites or are you most of the time here ?
Here most of the time. The job of a Director is very intense, and there is always too much work to do. But as for the excavations, at Megiddo, we usually excavate every summer, for about seven weeks. We do excavations at others sites as well. Overall, we are in field for two or three months, in total every year. We only conduct field seasons for a short amount of time, during which we collect so much data that work in the lab and offices takes up far more time.

Do you have common project with École biblique ?
Not at present. Maybe in the past other directors did, but I am not sure. But of course, many of the people working there are working on the same materials, so we are all parts of the same academic community and field of study.”

The article about the annual session “Bible in Jerusalem” and the participation of Matthew Adams, who guided friars on a tour at Megiddo.

The Lecture’s video about Megiddo, by Matthew Adams, at École biblique.