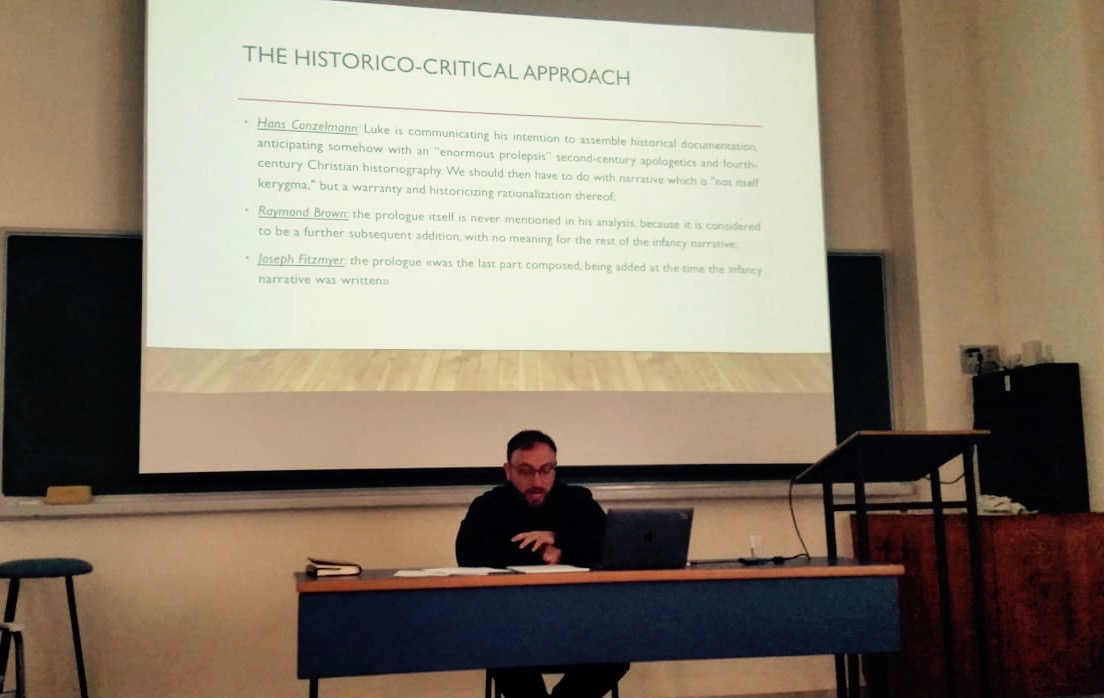 On May 23 Rev. Marco Napolitano delivered his lectio coram before the conseil académique and students of the École. The lecture addressed “The Lukan Preface: A View of its Context and Some Recent Research” and effectively demonstrated Rev. Napolitano’s command of an important body of research, as well as his capacity to engage questions of meaning and method in an original and rigorous way. Attentive especially to lexical data and the dynamics of Luke’s establishment of a “reading pact,” the talk was lightened with an artful Italian touch and analogies ranging from Respighi’s “Pines of Rome” to the opening lines of Pinocchio helped suggest new ways of approaching the familiar material in Luke 1:1–4.

At the heart of the presentation were two major proposals. First, after identifying three major schools of interpretation of the Lukan preface, Rev. Napolitano contested the classic assumption of many Lukan scholars opposing kerygma and history, underscoring Luke’s merger of these ideas and the special importance of philological research in pointing the proper way forward. Second, in response to this broad conclusion, he advanced the hypothesis of a specific Lukan strategy of “deliberate ambiguity,” by which key terms in the preface bear both historiographical and specifically Christian meanings. A key illustration of this idea was drawn from the written exegetical work that he had submitted to a jury of readers before being admitted to the lectio. In that study, Rev. Napolitano argued specifically that the verb παρακολουθέω encodes an important sense of discipleship — a type of existential following — and must not be reduced to the semantic field of “research,” as most translations and scholarship on this text suppose. Other instances of such double meanings were likewise suggested.

The period of questions was interesting and lively, as the issue of the “eyewitnesses” was much discussed. After a short deliberation, the conseil was pleased to announce its enthusiastically positive vote to accept Rev. Napolitano as an official candidate for the doctoral degree.