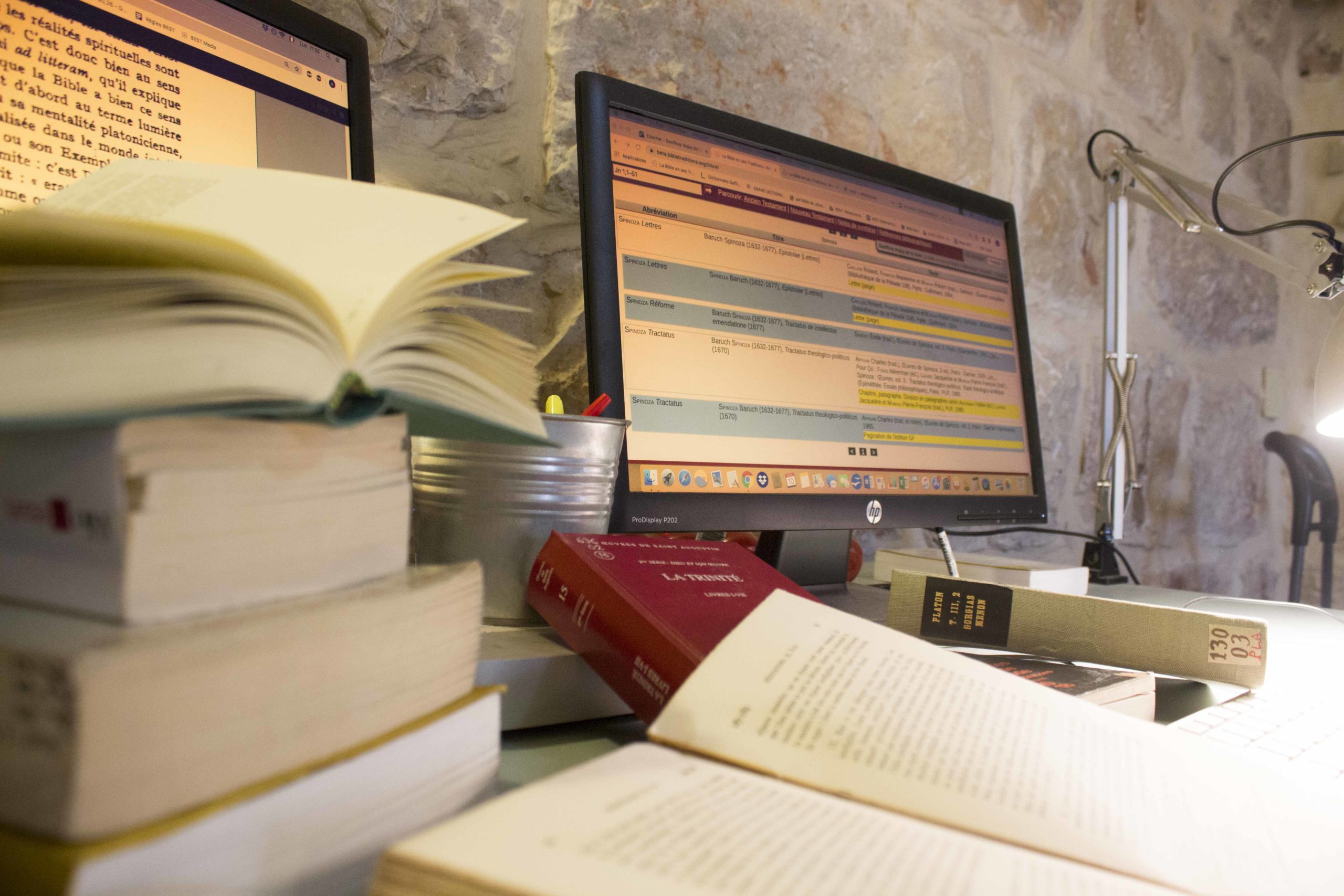 FRUITS OF THE SEMINAR “BIBLE AND PHILOSOPHY”

Every Thursday, from 4 to 6 p.m., the main office of The Bible in its Traditions is transformed into a classroom. Several members of the seminar “Bible and Philosophy” meet with Br. Olivier-Thomas Venard OP around the big screen in the Bible in it’s traditions‘s main office. Among the regular or exceptional participants, besides Prof. Avital Wohlman (HUJ), Prof. Augustin Tavardon (EBAF), Prof. Riccardo Di Giuseppe (ICT), or Xavier Lafontaine, one of the very first assistants of the BEST (this year a doctoral student with a scholarship from the Académie des Inscriptions et Belles-Lettres) are two students of the École Normale and research assistants studying abroard : Pauline Micos, who is studying the Platonic corpus in particular, and Geoffroy Aujay de la Dure, who holds a Master 2 in Philosophy.

“One of the goals of this seminar is to enrich the annotations of the research program. Until recently, the exchanges focused on the intersections between chapter 28 of the Gospel according to Saint Matthew, the philosophical positions related to the Resurrection, and the problems linked to this event. We approached this mystery by delving into several themes which are themselves linked to two main axes. First, the miracle : after all, isn’t the Resurrection the greatest of miracles? Second, the testimony : we asked ourselves about the degree of truth that can be given to the testimony we receive and, more fundamentally, about the reasons we have for believing in a text – in this case, the Word of God.” – Geoffroy

From one week to the next, Pauline and Geoffroy are responsible for augmenting the notes that were studied during the seminar, and for collecting material that will feed into the discussions in the next session.

“We are trying to show the differences of opinion and interpretation among the philosophers. It is not a question of studying only one author as if he or she held the whole of philosophical truth.” – Pauline

From this comparison of classical or more contemporary philosophers emerges a fruitful discussion between researchers, another raison d’être for the seminar.

“During the sessions of the seminar, everyone is invited to speak. The exchanges that the five of us have had give us the opportunity to consider avenues of reflection that we would not have thought of alone. The fact that we have followed different paths, which are nevertheless linked to philosophy, is also a major asset. The multidisciplinary nature of the speakers (philosophers, exegetes, linguists, etc.) makes it possible to shed light, here and there, on a specific point during the debates. These extra-philosophical analyses lead us to deepen the discussions by examining a theory in another light. “ – Pauline

When asked what the next sessions of the seminar will be devoted to, Pauline and Geoffroy answer together: “To Michel Henry!” The second semester will indeed be a time for revising and increasing the notes of The Bible in its Traditions, which include references to the work of Michel Henry prepared by Sybille Gérain, an assistant in Jerusalem a few years ago, now a doctoral student in philosophy on Michel Henry at the Université Libre de Bruxelles in partnership with the Archives Michel Henry in Louvain. Based also on the work of Andrei Costea (also a young philosopher from the ENS, assistant last year), they also have the task of creating annotations for the entire prologue of the Gospel according to Saint John based on the notions used by the evangelist (“world”, “truth”, “light”, “life”, etc.).