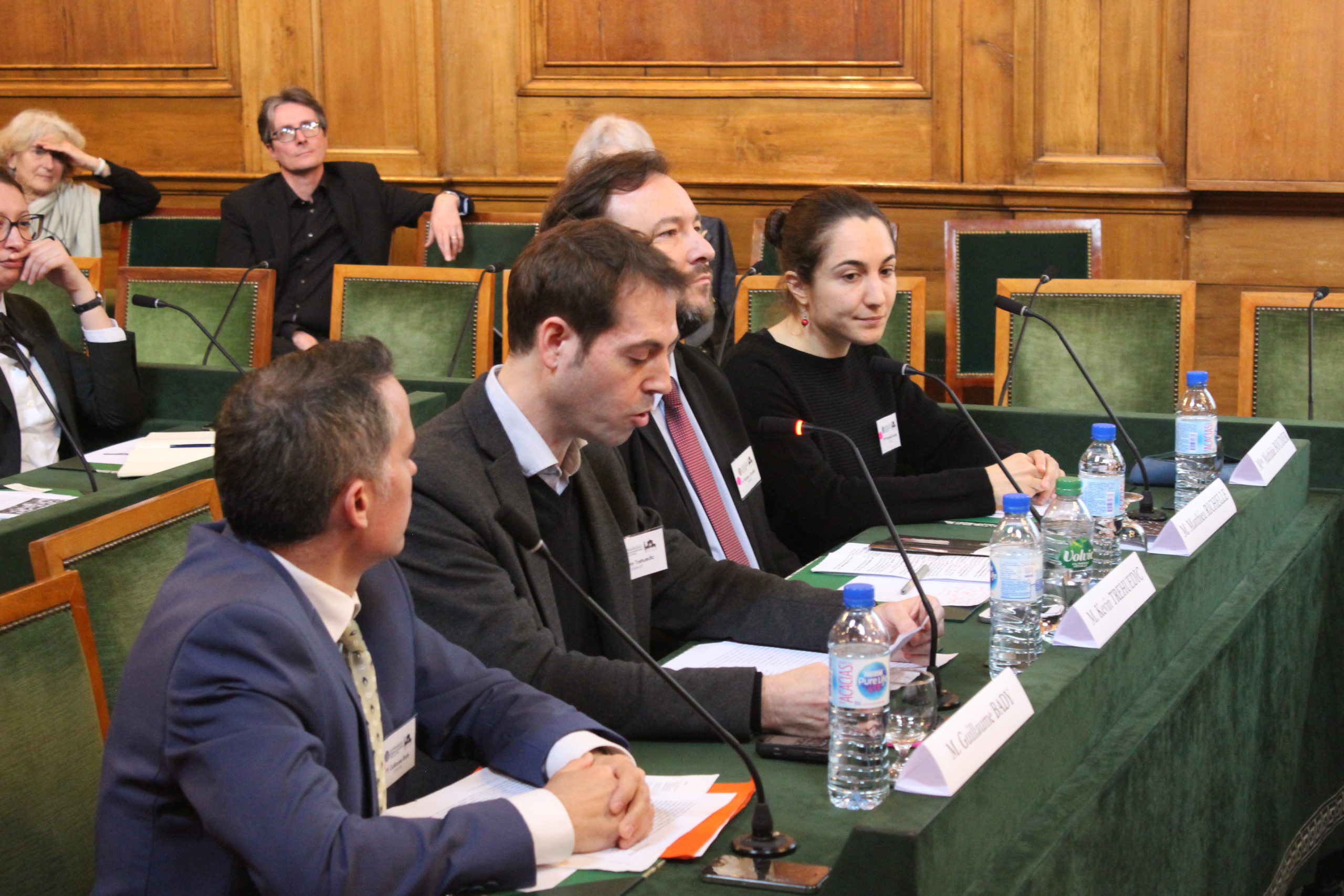 Last Friday, March 6th, the École Biblique was in the spotlight at the Académie des Inscriptions et Belles-Lettres: the colloquium “Le goût de l’Orient” brought together members of both institutions at the Institut de France to celebrate the centenary of the recognition of the EBAF as an École archéologique française. Previous Orientalists included six former AIBL scholarship holders who came to testify about their academic year(s) spent at EBAF.

Find in this second article the speech of Kevin Trehuedic, lecturer in ancient history at the University of Paris-Est Créteil and researcher in CNRS delegation at the French Institute of the Near East (IFPO).

Mr. Perpetual Secretary, Mr. President, Mr. Director of the School, I have the chance and the honor to testify here after having had the opportunity to benefit from the scholarship of the Academy. I went to the École Biblique et Archéologique during the year 2006-2007 to complete my doctoral research on the representation of power in Hellenistic royalty by studying Herodians and Nabateans. It was a decisive year for me, which I now identify four effects.

First of all, it is the physical contact with the places that marked, I am sure, almost all the students – walking and going to see: an autopsy of the archaeological remains, a geography through the body. This direct confrontation with the physical and real setting of the events that we historians, archaeologists or philologists try to grasp prevents the risk of being above all a man (or woman) in the office. To climb painfully up a height and to embrace a whole valley with our gaze immediately makes us understand the permanence of a traffic route below. Hence the success of the famous topography course, the Tuesday afternoon outings or the study trips and the encouragement of the Dominicans to set out to explore the entire region themselves. This is how the fathers pushed me from Christmas onwards to cross the Jordan River, a geographical curiosity and not a cultural frontier.

But the Orient is not just a silent setting. In the spring of 1848, in Jerusalem, the respectable Swiss Protestant Countess de Gasparin painfully discovered the Holy Sepulchre, “this sort of fair of nations”, she wrote, embarrassed by the “savage clamors” of the “species of furious brutes, pushed here and there by the blind force of things”. The scene illustrates her discovery contrasting with her expectations. The diversity of the men and women we see living and of those who, having lived there, have left their mark, immediately embodies in the eyes of the young student the multiplicity of memories and rival realities and makes the historical depth of this land better understood. It is necessary to take the measure of this symbolic polyphony of the past, and for this reason the School had a way: to carry out jointly the study of languages and material culture, that of texts and ethnographic realities, in order to better grasp secular permanence and slow variations. I give an example that I observed a few years ago: the cultural distinction between the peasants of northern Palestine, until recently farmers who ate wheat, olives and poultry and whose women wore colorful pants, and the semi-nomads of the south eating sheep and dairy products and whose women wore embroidered dresses, makes one think of the different biblical spaces of the hills of Samaria and the deserts of Judah. It is a question of understanding the genesis of today’s heritage and its entire chain of transmission or rupture and continuity – the way in which these traces that we historians constitute as documents and sources have been perpetuated or erased. Even if the student now spends only one year at the School and comes first to complete his or her training in his or her own field, he or she remains surrounded by specialists in other disciplines and the variety of courses offered over the past century (Egyptology or Assyriology, Hebrew, Arabic or Greek) certainly helps to appreciate the richness of the cultures of the ancient East. Like everyone else, I benefited from the rich discussions in the refectory where students, teachers and visiting researchers exchanged views on their respective works. This year in Jerusalem convinced me not to lock myself into a particular approach but to keep open a broadened curiosity for all the flavors of the Orient.

A third effect of the Academy’s scholarship and training at the School is ultimately measured only afterwards. Over the years, many former scholarship holders have returned to the East. Taste by extension is also appetite, the desire aroused by the habit of a certain flavor – to take a taste, it is said. However, all of us former scholarship holders have had different experiences of the Orient. The word is the same for all of us, the reality it refers to has been constantly modified and recomposed over the last hundred years. How far away is the time when the Reverend Father Lagrange went to Cairo by train! Almost fifteen years ago, I went with Aurélie and Mickael here present to the monastery of Saint Catherine of Sinai by bus; today, security imperatives no longer allow it. The horizon narrowed as comfort increased; we – Aurélie and Mickael certainly remember – carried a volunteer from the library with a sprained ankle out of a gorge in the Néqèb, but we did not encounter the inconveniences of the orientalists of the past – neither caked water nor (I quote) “pestilential mushrooms and purulent bubbles”. Over the course of a century, the long summer caravans of students exploring Asia Minor turned into a short week’s jeep ride in the deserts, then a few days’ bus ride in Israel’s national parks. Times and the country have changed. I am from a generation of post-intifada scholarship students, experiencing a fragmented territory. It may now seem paradoxical to give a taste of the East to Jerusalem, a city that is now closing in on itself. But it is on the contrary in Jerusalem that one can best perceive how the East was created by the West, to use the subtitle of Edward Saïd’s provocative book: in its political and territorial division, of course, but also in the perception of a certain otherness of proximity. In Le goût de l’archive, Arlette Farge testifies to the passion she feels for her object of study, but also reminds us of the imperative of distance from it. Figuratively speaking, in fact, taste is also the faculty of judgment, of discernment – having taste, it is said. This Near East is an operator of reducible difference. All in all, the Academy’s scholarship has a delaying effect: it is an impulse towards the East, today a territory in full mutation, to which one must then adjust.

On the other hand, a year spent at the École Biblique et Archéologique was finally for me the experience of what constitutes a French institution, in its long and stable time. First of all, I experienced a gathering of people because the Republic sends men and women, Christians and non-Christians, of several nationalities and from all continents, but in principle French-speaking, to live in community at the convent of St. Etienne. I then benefited from operational support within the network of French institutions in the Near East: a phone call from Father Jean-Baptiste Humbert and we were housed, two scholarship holders from the Academy, in Amman at the IFPO. Finally, I had access to the archaeological material from the excavations of the School, which is playing its full role here as a smuggler. After my scholarship year, I did go to Damascus, Palmyra, Beirut and Paphos in Cyprus, but I keep coming back to Jerusalem and am currently collaborating with the School for the publication of the amphora stamps discovered in Gaza.

Four effects, then: one, the acute awareness of the determinisms of geography; two, the measurement of the historical depth of this land, in its variety and its fixities; three, the desire to return to it and thus the awareness of its evolution; four, the assurance, through the succession of individuals, of a certain permanence of France in the Near East. These four effects have nourished me and continue to do so as a man and as an academic, in my practice as a historian of the Southern Levant of the Hellenistic and Roman periods and in my work as a teacher in which I seek to transmit a taste for the Orient.