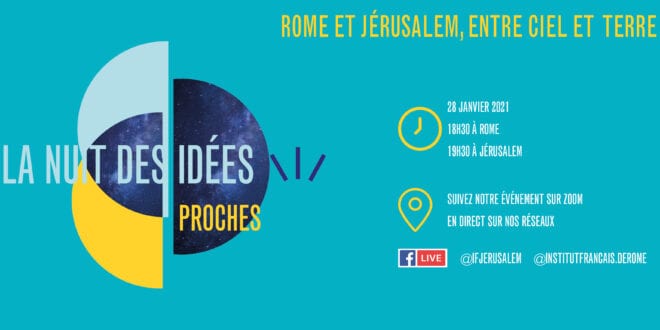 La Nuit des idées, organised each year by the French Ministry of Foreign Affairs in all French consulates and embassies around the world, gave rise in Jerusalem to an original evening co-organised on Zoom by the Consulate General of France in Jerusalem and the French Embassy to the Holy See in Rome.

Theme: How to maintain dialogue between cultures and religions? How to invent the transmission of traditions, culture and liturgy in the digital age?

After an introduction to the theme, a first round-table discussion brought together three actors from the field to discuss how intercultural encounters transcend the religious fact. The participants were Mr Daniel Sidès, history teacher at the French High School in Jerusalem, Mr Charles Personnaz, director of the National Heritage Institute (Paris) and author of the report on support for Christian communities in the Middle East, and Mr Benoit Bonnet, director of the International Institute of Saint Dominic in Rome.

Fr. Jean Jacques Pérennès, Director of the École Biblique de Jérusalem then spoke about Father Lagrange’s exceptional career path during a round-table discussion with Mrs Pauline Bebe, Rabbi of the Liberal Jewish Community of France and animator of the programme “Emouna, l’amphi des religions”, Mr Ghaleb Bencheikh, President of the Fondation pour l’Islam de France, leader of the “Campus Lumières d’Islam” and Fr. Laurent Basanese, Director of the Centre for Interreligious Studies of the Pontifical Gregorian University. Theme of the round-table: transmitting a tradition in the digital age: transmitting without betraying. It was also the occasion to present a short film on the programme The Bible in its traditions.