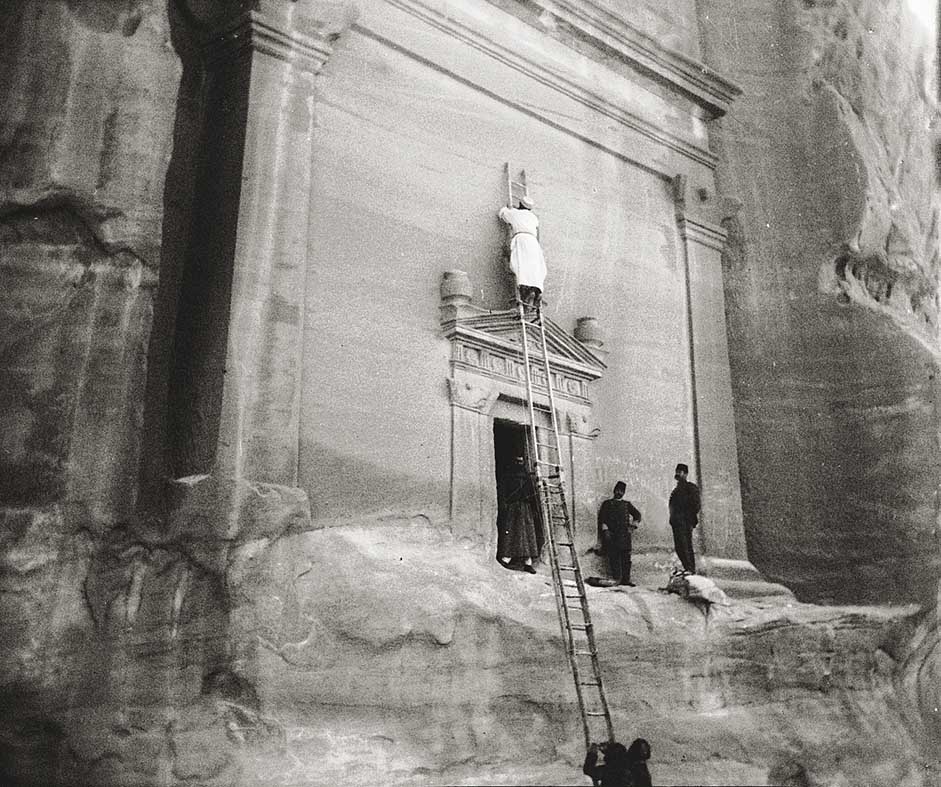 IN THE FOOTSTEPS OF FRIARS JAUSSEN AND SAVIGNAC IN SAUDI ARABIA

Frs J.-B. Humbert and J.-M. de Tarragon spent 15 days in Saudi Arabia at the beginning of March, invited to Jeddah by Mr. Charles-Henri Gros, Cultural Attaché of the Consulate General of France. The aim was to provide three services: a photographic exhibition within the framework of a Festival of Photography in Jeddah, on the theme of the old city as it was in 1917; then two conferences with projections, at the Consulate General. As a result, the Dominicans of Jerusalem took the opportunity to escape for five days, going 700 km to the north-east of Jeddah, in the footsteps of Fathers A. Jaussen and R. Savignac, who explored the region of al-‘Ula / Medain Saleh in 1907, 1909 and 1910.

The photographic exhibition in Jeddah.

The photographic exhibition presented 54 prints, in two batches, one from the negatives of Father Savignac, the other from a family album, lent by the granddaughter of Mr. André Alexandre, a French soldier of the military contingent stationed in Jeddah in the spring of 1917. R. Savignac, an interpreter officer, was also there. Their photos are contemporary and illustrate the architecture and life of Jeddah. The Consulate General of France obtained to present the exhibition in an old house in Jeddah, restored by a Saudi cultural foundation, the Beit Jarbatly. On the first floor, our photos; on the second, those of a contemporary French photographer, Thierry Bouët, on the city of Paris. The two metropolises were in dialogue 115 years apart… Ten days later, the two conferences at the Consulate presented the old photos of the Mission en Arabie expedition, by J.-.B. Humbert — and the variety of the École Biblique’s photographic collection, in a medley of 80 scans commented by J.-M. de Tarragon.

The excursion of Frs Humbert and Tarragon to al-‘Ula was to drive from Jeddah, 750 km, to spend 3 full days in the great oasis. The distances between the sites of al-‘Ula (el-‘Ela of Savignac, Hegra of the Ancients) and Madaïn Saleh meant that 400 km of back and forth driving in a small rented car was necessary. By chance, the French archaeological team of the CNRS, directed by Mrs. Laïla Nehmé, was finishing its excavation program of the Roman period at Madaïn Saleh, and was kind enough to accommodate the two visitors. The Royal Commission of Alula (RCU) gave special permission to the heirs of Jaussen and Savignac to approach sites from which tourists are excluded. Fr. Humbert was then able to photograph where Savignac had operated.

The triclinium of the Diwan of Dedan in 1907.

The Diwan of Dedan this year. 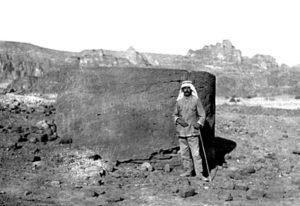 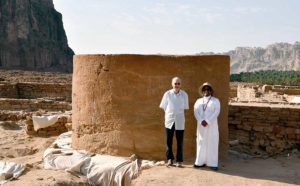 The scientific interest of Mission en Arabie, 1907, 1909 and 1910, remains intact today, which is why archaeologists continue the study of the ancient settlements of the oasis, Dadanites, Lihyanites, Nabateans, Romans. On the way back, Jean-Baptiste H. and Jean-Michel de T. made a detour to have a look, on the road to Medina, at the site of Khaybar mentioned in the Koran.