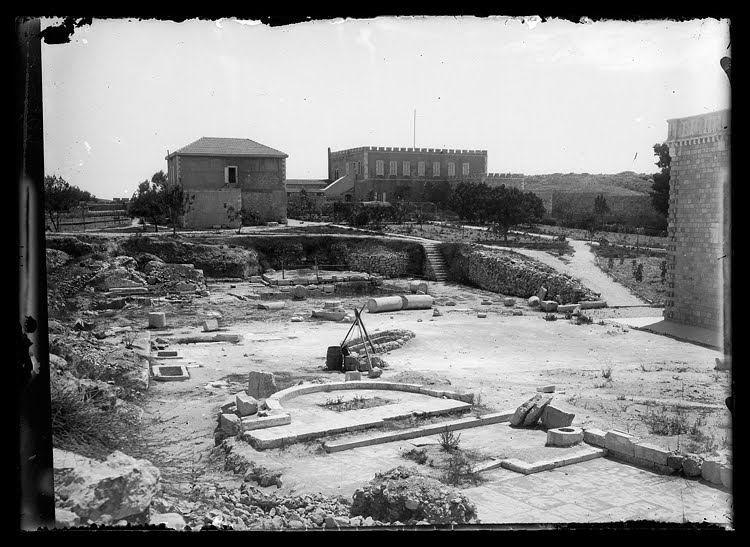 The École Biblique, a 100-year history

The École is the oldest biblical and archaeological research center in the Holy Land. It was founded in 1890 by Father Marie-Joseph Lagrange (1855-1938) in the Dominican convent of St Stephen in Jerusalem, which had been established in 1882.

Inspired by the name of the École Pratique des Hautes Etudes, established in Paris in 1868, Father Lagrange called his foundation the École pratique d’études bibliques (Practical School of Biblical Studies), in order to emphasize its particular methodology.

The Bible would be studied in the physical and cultural context in which it was written. Father Lagrange spoke of the union of the ‘monument’ and the ‘document’, or archaeology and the exegesis of texts.

Its name was changed on 20th October 1920 when the Academy of Inscriptions and Belles-Lettres in Paris recognized the École as the École archéologique française de Jérusalem (French Archaeological School of Jerusalem), because of the quality of its achievements in this field. It is the only national archaeological school in Jerusalem which offers a program of courses and awards a doctorate in biblical studies.

During the first ten years of the École, Lagrange chose and trained collaborators, and he succeeded in forming a faculty envied by all.

Louis-Hugues Vincent (1872-1960) proved to be the best specialist of his generation in the archaeology of Palestine.

Antoine-Raphael Savignac (1874-1951) made a name for himself in Semitic epigraphy.

Felix-Marie Abel (1878-1953) devoted himself to the history and geography of Palestine, where he manifested such erudition and judgment that he gained a great reputation in the scholarly world.

Édouard-Paul Dhorme (1881-1966) became a famous Assyriologist, and was the first to decipher Ugaritic.

Lagrange himself also wrote much, both on the New Testament and on related subjects.

During the fifty years (1890-1940) of their intense interdisciplinary collaboration, the members of this small team published 42 major works, 682 scholarly articles, and more than 6200 reviews. Articles and reviews appeared in the Revue biblique, founded in 1892, while the books were collected in the series Études bibliques, launched in 1900.

Starting in the 1930’s, the first team began training a new generation of researchers.

Bernard Couroyer (1900-1992) published a vast output in the field of Egyptology, while teaching Coptic and Arabic.

Roland de Vaux (1903-1971) made himself famous both for his biblical knowledge and his archaeological work.

Raymond-Jacques Tournay (1912-1999) is well known for producing the best translation of the Psalms into modern French.

It is to the researchers of the second generation that we owe the famous Jerusalem Bible (French edition, 1956), whose publication constituted, as it were, the realisation of Father Lagrange’s vision. The quality of the introductions, the translations and the notes reflected the best contemporary exegetical research, while its attractive layout also facilitated understanding the text – using stanzas, for instance, to demarcate poetic passages. This arrangement broke radically with the traditional presentation, and became the model for all subsequent modern Bibles. The Jerusalem Bible was translated into the major modern languages.