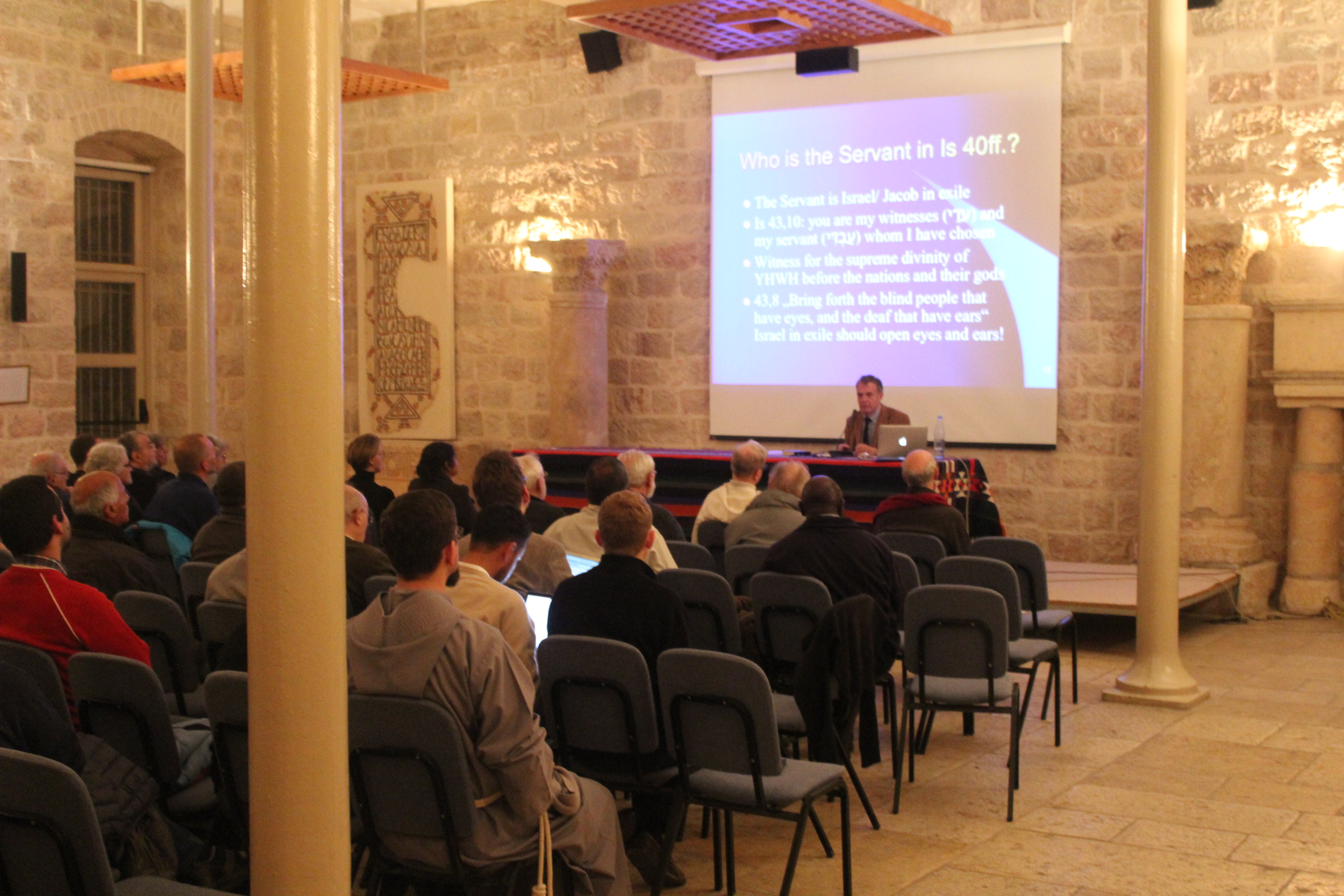 Exegesis: The Servant and the Servants in Isaiah 40-66

The Prof. Dr. Ulrich Berges, from the Bonn Universität, was student at the École biblique during the years 1980’s. He came back last week to hold a conference about the Servant’s songs in Deutero- and Trito-Isaiah. Fr. Dominic Mendonca, OP. wrote for us a summary of his Lecture.

Professor Berges began his lecture with a brief discussion on the authorship of the book of Isaiah. Is 1:1 is considered to be the title of the whole 66 chapters of the book of Isaiah. Some view it as a later superscription by a chronicler in accordance with Sir 48:24 “by the spirit of might he (Isaiah) saw the future and comforted those who mourned in Zion”. According to Johann Christoph Doederlein (1746-1792) Isaiah 40-66 were written by an anonymous prophet or by a late exilic Prophet. It was Bernard Duhm (1847-1928) who advocated the theory that the book of Isaiah reflected three different periods: 1) Proto Isaiah (Is 1:39)- Assyrian period; 2) Deutero Isaiah (Is 40-55)- Babylonian period; 3) Trito Isaiah (Is 56-66)- Persian period. Strong opposition against Duhm was made by Wilhelm Caspari who dismissed the idea of the anonymous exilic prophet as ‘a house plant on scholars’ desk’. However, Duhn’s theory found enormous success and helped to explain the growth of the book of Isaiah without neglecting the individual authorship.

The identification of the Servant

Who is the servant in Is 40 ff? He is Israel in exile. Isaiah 43:10 says: “You are my witnesses and my servant whom I have chosen”. He is the witness to the supreme divinity of Yahweh before the nations and their gods. Is 43:8 says that Israel in exile should ‘open the eyes of those people who are blind, yet have eyes’ and ears of those who are ‘deaf, yet have ears’. In Is 48 the author says, “You call yourself Jacob but you are not willing to go back to Jerusalem”. The servant without name is a literary figure who represents the destiny of those Israelites in and after exile. He is called to be the witness of Yahweh before Israel and nations. Is 49:5 says: “Yahweh formed me in the womb to be his servant, to bring Jacob back to him”. Is 49:6 says: “I will give you as a light to the nations, that my salvation may reach the ends of the earth”. It is referring to the group coming back from exile. They have a mission to Israel and to the nations.

The destiny of the Servant

Chapter 53 describes the vicarious suffering of the servant. There is a change of visions. First the servant was struck by God and now we see he was bruised for us; he bore their infirmities. He is destined to be the sin offering (asham) for the majority. This cultic metaphor speaks of the destiny of the servant. It is striking that after chapter 48 the name of Cyrus does not appear. The name Zion now begins to appear. The author is holding a discussion: can you convince Sion? Cf. 54:17b; 56b; 63:17; 65:8, 9, 13, 14, 15; 66:14.

Offspring of the Servant and children of mother Zion

Is 54:13 says, “all your children shall be taught by Yahweh. Abadim refers to the children of those exiles coming back. The true servant of God who came back from Babylon continues in the servants. The abadim have the same destiny of the servant. They are confronted by others. Just as the servant was opposed by the majority so also will the servants (Is 65; 66:5). But Yahweh will vindicate his servants (54:17b).

The Programme of the servant

The reference to the inclusion of the foreigners and eunuchs is striking (Is 56:1-8). This is against Deuteronomy 23:2 (“He whose testicles are crushed or whose male member is cut off shall not enter the assembly of the Lord”). What counts in Deutero Isaiah is the ethical behaviour and not the ethnic descent. Yahweh will accept the prayers and offerings of strangers and eunuchs who keep the Sabbath and refrain from evil (cf. 1 Kgs 8:41ff). Isaiah 56:7 declares: ‘My house shall be called a house of prayer for all peoples’. This (Is 56:7- for all nations) is in direct contradiction to Ezekiel 44:9 (no foreigners). Moreover, the prophet Ezekiel never mentions the name Zion. He always mentions the name Jerusalem. Because the name Zion has a universalistic significance as it includes all who have access to God. Such a universalistic idea of Deutero Isaiah is also found in the book of Psalms: All people clap their hands (Ps 47:1). So Is 40-55 have a collective authorship which is close to Psalms: universal kingship of Yahweh; The expression new song is another point of conformity between Isaiah and Psalms (Ps 33:3; 40:4; 96:1; 98:1; 149:9; 149:1; Is 42:10. This concept is nowhere else in the OT.

In Is 40-66 there are more and more scriptural references. There are references and allusions to Noah, Abraham, Sara, Jacob/Israel, Moses.

At the end of the lecture the professor posed the following challenges for the future: i) Individual prophets were not the authors of their books; ii) If this holds for Is 40-66 then it could be also true for Is 1-39; iii) The new challenge to understand the prophetic books as the product of spiritual activity.