STUDY TRIP TO GALILEE AND SAMARIA

The École biblique students have just returned from the traditional study trip to Galilee and Samaria. After five days of visiting the archaeological sites in these regions, the students return to Jerusalem tired, but happy to have discovered these landscapes and to have learned more about the history, geography, development of the different religions, archaeological excavations and geopolitics of this area.

Four students look back at the highlights of the trip: 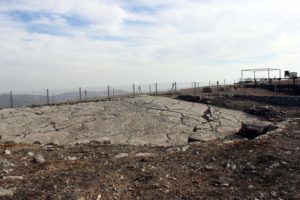 According to Samaritan tradition, it was on this stone that Abraham was about to sacrifice his son Isaac.

“The visit to the temple on Mount Gerizim overlooking Nablus (Shechem, after the name of the first capital of the Northern Kingdom) gave me an idea of the past and present importance of the Samaritan tradition. Our reading of the story of Jesus’ encounter with the Samaritan woman (Jn 4) at Jacob’s well was given a striking relief by this context!” 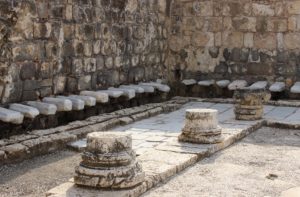 The Beit Shean term toilet. The user sat on two stones and could chat with his neighbours.

“Visiting Beit Shean gave me my first taste of what the splendour of an ancient city could be, especially in Roman times. Everything contributes to transporting us back in time: going on the theatre stage, walking in the shadow of the Cardo columns, walking on the agora, visiting the baths (and even the toilets!), going up to the temple overlooking the site and finding yourself in ancient Egypt… You just have to open your eyes to travel: the remains are such that, for once, your imagination easily does the rest!”

Remains of the Capernaum synagogue with houses in the foreground.

“Capernaum; a fishing village in the ancient province of Galilee, on the shores of Lake Tiberias. It is the most cited place in the Gospels after Jerusalem, where one can meditate on Jesus’ act of healing the sick and vulnerable. We have observed that archaeology confirms the proximity between the synagogue and the house of Peter! (Mk 2:21-29)” 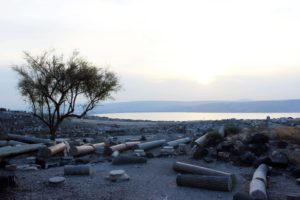 The columns of Hippos that fell in the earthquake of 749.

“On the heights of the eastern shore of Lake Tiberias, we visited the remains of beautiful Hippos, a city of the Decapolis built in the Hellenistic period and occupied until the terrible earthquake of 749. As we walked through the ruins of Hippos, and looked out over the magnificent view of the lake, I thought that archaeology and history definitely go hand in hand. The architecture of Hippos reflects the political and cultural upheavals that took place between the 3rd century BC and the 8th century AD: in turn, the Greeks, Romans and Byzantines appropriated the site, not hesitating to remodel it at great expense. Yes, field archaeology is complementary to our work in the library: by activating these two levers, we acquire valuable knowledge for our academic research.”