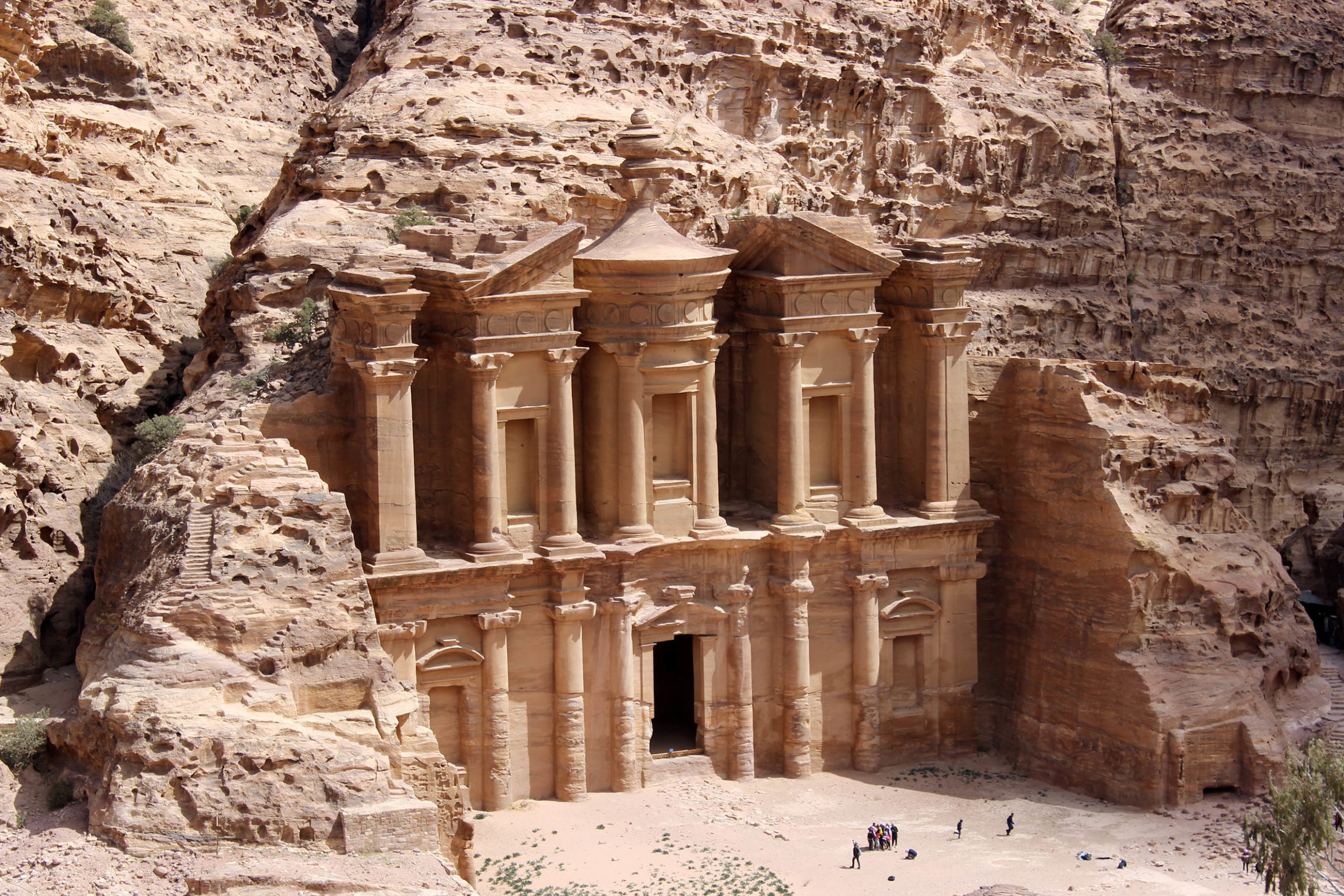 The second semester has begun in high gear for the École Biblique students who have just returned from the study trip to Jordan. For six days, guided by the famous Fr. Dominique-Marie Cabaret, they surveyed the country’s archaeological sites from south to north. From the spectacular colors of Wadi Rum and Petra, to the mosaics of Madaba, to the Herodian fortress of Macherontius and the dazzling ruins of the ancient Decapolis city of Jerash, they were able to expand their archaeological and historical knowledge of the region. The presence of a Jordanian guide throughout the trip gave the students additional insight into Jordanian life today and the country’s recent history.

Four students look back at the highlights of the trip: 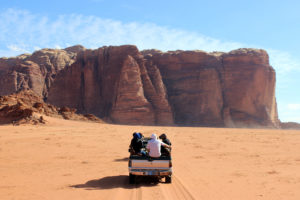 4×4 tour in Wadi Rum, looking for inscriptions in proto-Arabic.

“After descending to the far south of Israel, we cross the border a little north of the coastal cities of Eilat and Aqaba, and almost immediately we are in the Jordanian desert. We leave the Rock of the “Pillars of Wisdom” to the west and reach our first destination: Wadi Rum (pronounced Ram). “Vast, resounding, divine…” in the words of Lawrence of Arabia. Great expanses of sand, gigantic rocks of ochre color, red dunes, Bedouin camps, placid dromedaries… perched six by six on pick-ups, we go deep into the desert, towards ancient inscriptions in proto-Arabic… Under the guidance of fr. Dominique-Marie, a good little climb will lead us a little later to a Nabatean “high place”, explored by the School in the 30s. Above all, I keep in memory this enormous rock in the middle of the desert, an image of solidity, refuge and refreshing shade. The biblical expression “God is my rock” (Cf. Ps 18:3) gives it its full meaning!” 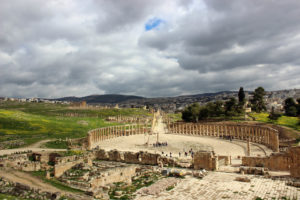 View on the oval forum of Jerash.

“Like the emperor Hadrian in the 2nd century, no one can cross the triumphal arch of the city of Jerash without being seized by the beauty of this city. Crossing the oval forum and advancing on the Cardo maximus punctuated by its colonnade, one discovers on both sides the Macellum, the Nymphaeum, the temple of Zeus and that of Artemis which compete in grandeur. But the city also keeps the memory of its Christianization with its thirteen churches with mosaic-covered floors, including the Theodore cathedral. Contemplating today this city covered in part by a meadow of spring in flowers is a chance.” 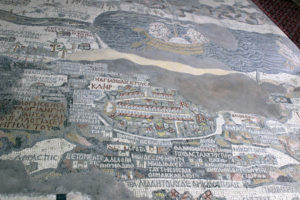 The map of Madaba: a map of the region. Mosaic on the floor of an actual orthodox church.

“It is not easy to get to the famous map of Madaba, because the church that holds it carefully protects it under a carpet and you have to juggle between the times of the services to have the chance to see it. But once in front of it, what a splendor! It is the entire Palestine that unfolds from west to east before the eyes of the amazed visitor, as if he arrived from the Mediterranean. Unfortunately, it is very damaged since less than half of its initial surface has survived, but one can still see the city of Jerusalem in the center, with notably the Damascus Gate, the Holy Sepulchre and the church of Nea built by Justinian (which allows it to be dated to the second half of the sixth century). The partly cavalier perspective does not prevent the topographic accuracy, impressive for a mosaic map.” 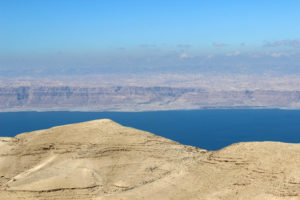 View of the Holy Land and the Herodian fortresses on the other side of the Dead Sea.

“The magnificent view from the Macheronte fortress over the Dead Sea and the Jordan River to the Judean mountains with Jerusalem – this helped me understand Herod the Great much more than books. In those days fire could be used to send signals to other military bases. By building his fortresses the king did not only tear palaces out of the desert, but he wove a part of a web that would ensure his control at all times and in all places. During the reign of his son Herod Antipas, John the Baptist was caught in this net and beheaded – probably at Macheront. I am impressed that it is still the preacher of the desert who is revered to this day, when the power of the Herodians has fallen along with their fortresses.”