A SUMMER IN THE MIDDLE OF SHARDS

As they have done for several years, friars Jean-Baptiste Humbert and Jean-Michel de Tarragon spent their summer in Amman, Jordan, working on the publication of the excavations carried out at the Amman. Fr. Jean-Baptiste tells us about this summer, spent sorting shards:

“In 1988, Fawzi Zayadine, the second in command of the Jordanian Antiquities Service and an alumnus of the École Biblique, invited us to join him in conducting excavations on the lower terrace of the citadel at Amman, the royal capital of Rabbat Ammon. We had to show the archaeological interest of this large space in order to prevent the construction of a large hospital in the heart of overcrowded working-class districts. Four campaigns between 1988 and 1994 were successfully carried out, interrupted by the political upheaval following the Gulf War. The first major project uncovered part of the 8th century BC palace, where a hundred or so pieces of pottery, the king’s crockery, were found. The second excavated the fortification of the terrace supported by the enormous Middle Bronze Age rampart. Four ramparts are juxtaposed over a thickness of almost 8 m and stacked 9 m high. It was customary in the early centuries to throw the pottery over the wall. We collected hundreds of buckets of shards at the foot of the wall, in a modest survey of the vast dumping ground. Ancient rubbish bins are our delight.

Bags of shards to be sorted

A first sorting on site, of the product of the two sites, had left us with 8 m3 of shards in labelled bags, stored in piles at our Bedouin’s, in a windowless shed. Twenty-five years later, we decided to devote the Amman Workshop, annually and in summer, to the selection of pottery for the forthcoming study. A busy, studious holiday.

The Workshop continued in July and August with the valiant team which, year after year, has acquired skills and efficiency under the leadership of J.-B. Humbert: J.- M. de Tarragon, stewardship and photography, Manon Saenko, restoration and electronic recording of data (and much appreciated cordon bleu), Mariusz Burdajewicz in charge of the typology of Iron Age pottery, Louis de Lisle in charge of the drawing, with an undisputed mastery of computerised iconography, Simon Brelaud in charge of the drawing and the typology of Roman pottery We were joined by a young Dominican from Paris, Etienne d’Ardailhon Miramon, who lifted the veil of the Orient by learning how to process archaeological documentation; he took care of the macro-photography of the 1,500 samples of ceramic pastes with great care and tenacity. Thank you Etienne. In addition, we fed five cats.

Drawing of the shards by Louis de Lisle

Reconstruction of the pottery by Manon Saenko

The work began in the Bedouin village where the cubic metres lay motionless under a thick layer of dust. The work was carried out at full speed, seven days a week and ten hours a day. We sorted 860 bags, which statistically contained 60,000 shards. We selected 1500 of them…. Some bags allowed us to reassemble several complete vases. Each shard, which for us is like a jewel, is examined, cleaned, described, drawn, photographed, sampled and classified. The work is arduous and would be monotonous if it did not lead to the construction of a typology like a great fresco of 8th century and then Roman tableware, whose thousands of drawings, pasted on the wall, unfold the beautiful pottery plates of the upcoming edition. Those who broke the vases more than 2000 years ago could not have imagined that they would later arouse such enthusiasm. 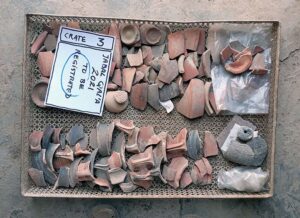 Crate of sorted and cleaned shards

We only have one cubic meter left for next year. Notice to amateurs…”