Researchers in residence in Jerusalem

Paul Rodrigue
“I was born in 1996 in Paris, where I passed my baccalauréat. At the age of eighteen, I was attracted to learning Latin and Greek and headed for Ireland. After a Bachelor’s degree at Trinity College Dublin, four years of training in the arts of classical translation, I went on to do a Master’s degree in Semitic Philology at Cambridge University in England. Using my basic Biblical Hebrew, which I was consolidating, I took the opportunity to delve into Imperial Aramaic and to write a dissertation on the translation of the Book of Proverbs in the Septuagint.
Now, as a doctoral student in comparative philology at the University of Cambridge, I am working in particular on Jerome’s sources in his translations of the royal court narratives: Daniel, Esther, Tobit and Judith. This doctoral research was motivated, if not by a whim, then by the quest for a junction between Latin, Greek, Aramaic and Hebrew.”

Noémie Kirion
“I have been a student at the École Normale de Paris for three years, in the Department of Ancient Sciences. I study ancient letters: Latin, Greek and Hebrew. Interested mainly in the Greek of the Septuagint, I wrote two linguistic dissertations on the Sirach, before taking a year off to participate in the project La Bible en ses Traditions. I contribute by rereading and annotating the French translation of Sirach and Habakkuk, from the Vulgate and occasionally from the Septuagint. 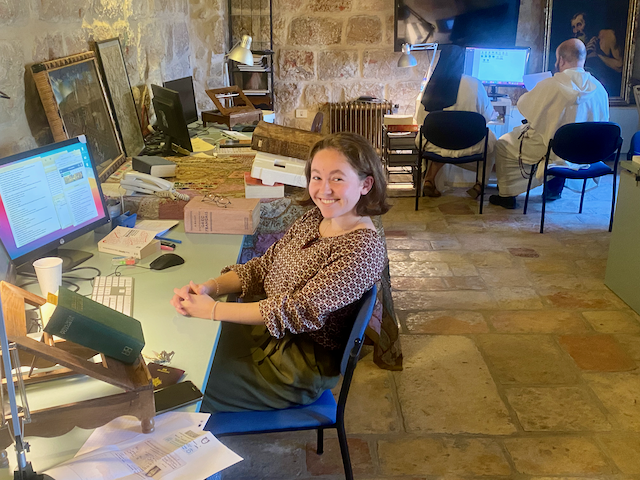 Anne-Laure at her post (in the background, Fr. Jorge Vargas at work with Sr Marie Reine)

“In my third year at the E.N.S. in Paris, I have just finished my Masters in Ancient History after having done a preparatory course in literature. I worked on subjects of Roman literature and history, such as the representation of youth in the Aeneid or the Roman geographical and military intelligence. Having also studied the Latin language for twelve years and taught it at the Centre Sèvres, I am armed to participate in the translation of the Vulgate in The Bible in its Traditions, at the Ecole française de Jérusalem: it is the books of the Maccabees that I am currently rereading.

Researchers around the world

Here is a non-exhaustive list of Bible in its Traditions researchers around the world: