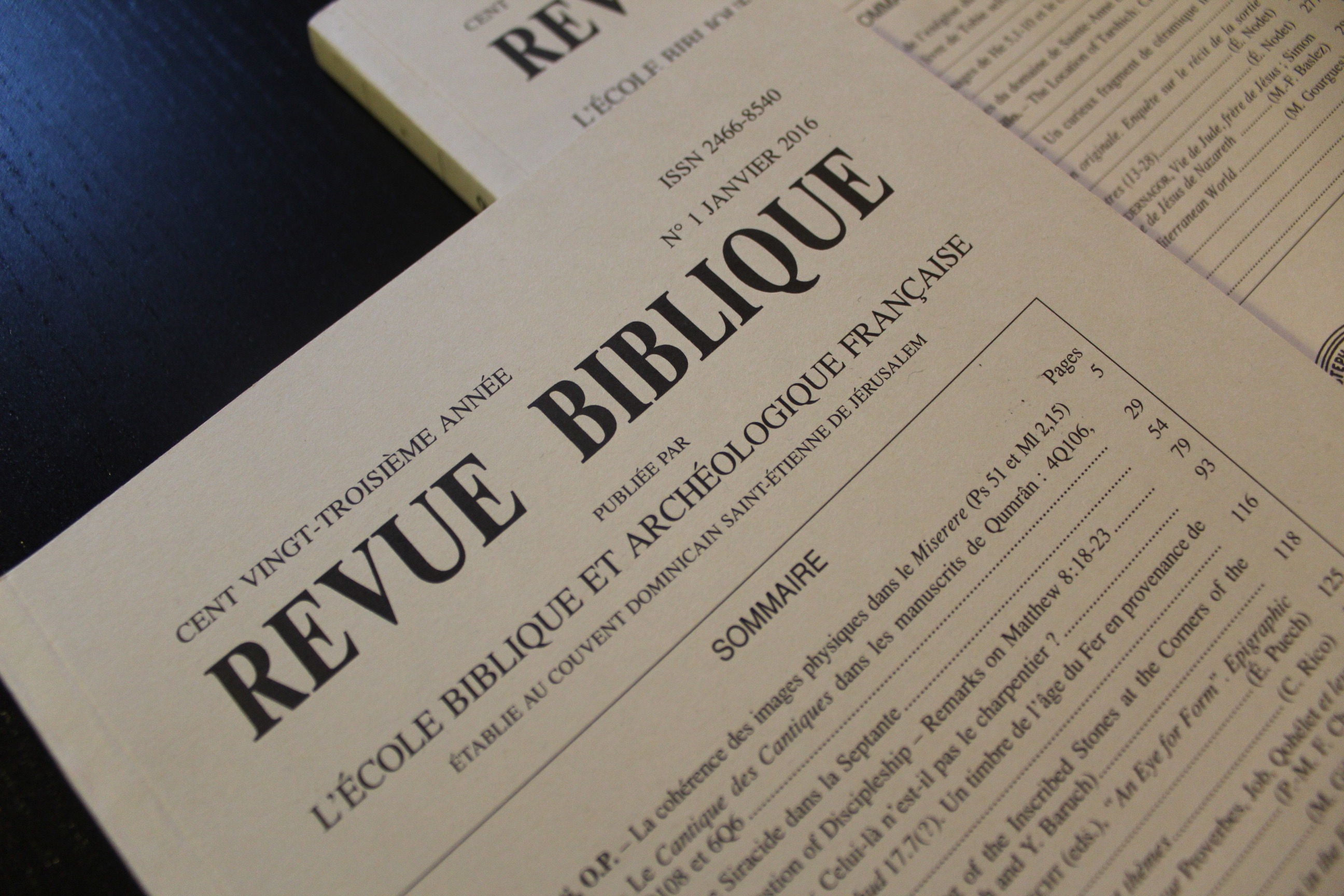 The Revue Biblique is ‘the official organ of the École biblique et archéologique française de Jérusalem’. The École was founded in 1890, during the Ottoman era, by Father Lagrange, a French Dominican friar. Two years later, the Revue Biblique was launched, in a form that has been maintained to the present day, some 130 years later. Hence it is the oldest Biblical journal in French, and is part of the small group of French academic periodicals that have passed their centenary. The editorial policy is directed by the Dominican friars in Jerusalem, who own the journal; the marketing and finance are managed by a publishing house in Leuven.

From 1892 to 1914, the journal was entitled Revue biblique internationale. Moreover, the Vatican had made it the organ of communication for the two secretaries of the Pontifical Biblical Commission between 1904 and 1908. The Revue Biblique succeeded in appearing without interruption through the two world wars, albeit under the guise of another title during the Occupation: Vivre et Penser: recherches d’exégèse et d’histoire.

The growth of the Revue Biblique can be shown in three notable periods.

During the years 1900-1930, the young team gathered by the founder reached its maturity. This was the period of the great projects of Fathers Dhorme, Jaussen, Savignac, Vincent, Abel, Carrière – 200 articles by Vincent, 120 by Abel, not counting the 150 by Lagrange. In 1912, the journal had a thousand subscribers.

Then a second period began, in the years 1947-1960, with a new generation, including Fathers de Vaux, Benoit and Tournay. This was the time of the discovery of the Dead Sea Scrolls and the excavations undertaken by Father Roland de Vaux at Qumran. The preliminary reports of other excavations by the École, notably Tell el-Far‘ah, were published exclusively by the Revue Biblique. This was the ‘archeological’ period of the Revue Biblique; but in exegesis it also saw the theological repercussions of the Second Vatican Council and the renewal of Bible studies, leading to new growth in research, as seen in the journal’s output.

The present period is witnessing a complementary course of action: new research emerging from the beaten tracks, and greater internationalisation, reflected by the team at the École, along with strong input from external authors.

The current authors continue editing articles and book reviews in Biblical studies, archaeology and history. In this way, the Revue Biblique reflects the current state of academic discussion.